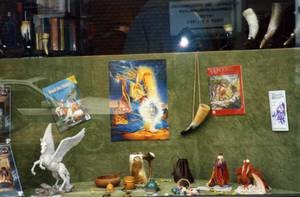 Turning a hobby into a career is something many of us can only dream of, but it is a reality for Pegasus Spiele founders and CEOs Karsten Esser and Andreas Finkernagel. Best friends Karsten (19) and Andreas (21), were barely adults when they managed to open their own tiny game store on a street corner in downtown Friedberg (Hesse, Germany) in 1993. From these humble beginnings they set out on a mission to share their love of games with the community, a mission that continues today!

As luck would have it, a tabletop gaming giant was also born that same year. Richard Garfield’s Magic the Gathering CCG, and Karsten and Andreas were paying attention! Attending gaming conventions around Europe, they intuited that the new wave of CCGs was going to be BIG, and bought into it at an equal scale. Suddenly, that little corner game store in Friedberg was one of only five wholesale suppliers for Magic the Gathering in all of Germany. 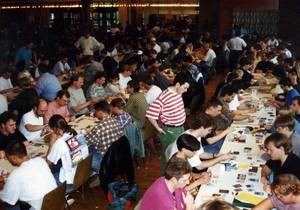 Their investment paid off: Magic was a smash hit across the world, redefining the gaming industry. Thanks to Andreas and Karsten’s good instincts, the first Magic: The Gathering tournament in Germany, with 512 participants, was hosted in Friedberg in 1995, just two years after the company was founded.

This success was inspiring for the two young CEOs, but they had no desire to rest on their laurels. It was clear that they needed to focus on their personal contacts in the industry to continue to grow. Their great relationship with Steve Jackson, of “Steve Jackson Games” led to Pegasus Spiele acquiring several licensing deals, including the German language rights to Munchkin.

A tongue-in-cheek parody of popular RPGs such as D&D, the satirical card game Munchkin quickly became a cult classic. Pegasus Spiele published the first German edition of Munchkin in 2003, selling out of the initial print run in only four weeks.

By this point the little corner store had become too small. The 90’s became a period of significant expansion for Pegasus Spiele as new retail and warehousing locations were opened, and employees were hired to staff them. Andreas and Karsten continued their efforts to form successful partnerships and the Pegasus Spiele catalog grew exponentially, reaching several thousand products by the early 2000s.

Karsten and Andreas‘s venture had meanwhile taken them from co-owners of a local game store to CEOs of a publishing company, but success only served to inspire. An urge to create led them to start publishing new games, first through reintroduction of classic titles, among these Illuminati 2nd Edition, originally designed and published by Steve Jackson Games in the early 1980s. By the early 2000’s Pegasus Spiele had established their own team of editors and developers, and were designing and releasing their own games. The release of Mondo in 2011 helped Pegasus Spiele’s “winged horse” logo to reach international recognition as a symbol of quality.

Pegasus Spiele gained further attention in 2009 when its German edition of Pandemie (Matt Leacock’s Pandemic) was nominated for the Spiel des Jahres. Subsequently, things really took off for Pegasus, with the company receiving a Spiel des Jahres nomination in 2010 for Im Wandel der Zeiten – Das Wurfelspiel: Bronzezeit (Roll through the Ages: The Bronze Age). That same year, sales of Munchkin exceeded 500,000 games. In 2011, Pegasus Spiele received a nomination for the Kennerspiel des Jahres with Strasbourg, and they went on to win that award in 2012 with the game Village. Munchkin, meanwhile, had now sold more than one million copies.

In 2012, Pegasus Spiele introduced Die Zwerge (The Dwarves), a co-op fantasy board game based on the book series by German author Markus Heitz. This game demonstrated a crossover appeal to role-playing gamers when it won, among other prizes, the RPC Fantasy Award. Pegasus Spiele once again took the winner‘s podium in two categories in 2014 when they were awarded the Spiel des Jahres for Camel Up, as well as the Kennerspiel des Jahres for Istanbul.

Despite the company’s extraordinary success and growth, Pegasus Spiele has never forgotton their own humble roots. In Friedberg, they are deeply involved in community projects around the city, and are passionate promoters of games as a way to foster a sense of community and connect generations.

The company’s motto “by players, for players” aptly describes their conviction that a love of games is a shared mindset. So please, come and play with us!

Close filters
No results were found for the filter!
Viewed
We use cookies. Some of them are technically necessary (for example for the shopping cart), others help us improve our website and to offer you a better user experience.