Behind the scenes – Interview with Klaus Ottmaier, Head of Publishing (Game department)

On our Pegasus Spiele Blog, we don’t only want to talk about our games, events, and promotions. We also want to focus on the people behind the scenes! We’ve already introduced you to our partners at Edition Spielwiese (find the blog post here: www.pegasus-web.com/pegasus-spiele-blog/our-partner-publishers-edition-spielwiese), and now it’s time for us to introduce you to Klaus, our Head of Publishing:

Klaus, first of all, thank you very much for giving us some information about yourself and your work. Let´s begin with how exactly did you come to work at Pegasus and how long have you been with us?

“The story to this is anything but straightforward, but I guess that´s typical for a career as a game editor. I’ve been working for Pegasus Spiele since April 2012, so almost nine years now. To explain how I finally got to work here, though, I have to rewind a bit more. After graduating from school in Austria, I studied biology. But like many of my colleagues here at Pegasus Spiele, after receiving my diploma I realized that my current profession (which in this case involved lots of lab work) didn’t match my ambitions or family goals. So I decided to shift over to the publishing industry.”

But this didn’t bring you much closer to the profession of a game editor, did it? What happened afterwards?

“After the birth of my sons I kept at home. At the same time, I started to work a few hours each month at Spielbrett, a game store in Cologne. Since childhood I’ve loved gaming and I still continued to be passionate about card and board games. I soon went from helping out once a month on a Saturday to working two afternoons a week and even more during the Christmas season. This activity was the big step towards becoming an editor because Argentum Verlag, a publisher also located in Cologne, asked the Spielbrett for support with sales projects. In early 2009 this contact resulted in some of us from the Spielbrett spending evenings testing different prototypes. After nobody else wanted to keep working on them, I declared myself willing to. And this was a heck of a lot of fun – all of a sudden I had a task, an activity that felt incredibly good. Until that point I had never been aware of what I had been “searching” for in a career. Surely not for becoming a game editor, because this job had never even crossed my mind, especially as there is no training and no course of study for it. In Germany there is probably only a very low three-digit number of lucky people who are allowed to practice this profession.” 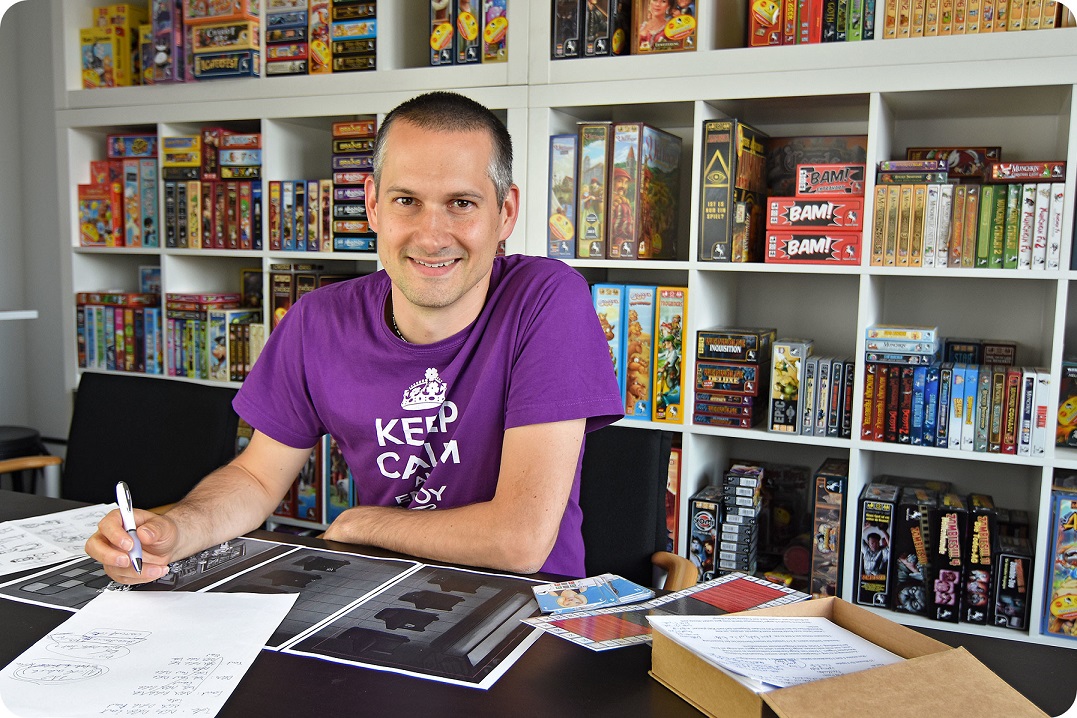 Which games in Argentum Verlag were you responsible for and how did you finally come to Pegasus Spiele?

“The first game I worked on at Argentum in 2009, and thus my first game ever, was Hansa Teutonica. It’s particularly exciting as we just released the Hansa Teutonica Big Box at Pegasus Spiele! Of course, the Big Box game was a very special project for me and brought back memories of my roots. After Hansa Teutonica, I worked on the worldwide language versions of the Martin Wallace game Last Train to Wensleydale. For the revised German edition, I added a second game board and an alternative game mode for two players. Now, I was officially a game editor – although working for a small publisher meant this also included sales, marketing, and appearances at conventions.

But working for a small publisher is more a matter of the heart and less a way to make money. Since I needed the latter for my family at the end of 2011, something happened that can be described as “being at the right place at the right time.” Pegasus Spiele was searching for a second game editor and I was one of the people they interviewed. I wasn´t tied to any particular place and when Pegasus chose me, I immediately took my chance and we moved to the company’s headquarters in Friedberg. Well, more precisely to the neighboring town Bad Nauheim ;)… Well, and this is how I became part of the Pegasus Spiele team in April 2012.”

Wow, such an interesting story! You have already mentioned the Hansa Teutonica Big Box, which was just released. What other titles are you currently on?

“Currently I’m working on The Dwarves Big Box. By the way, The Dwarves was my first game as an editor for Pegasus Spiele. Due to both of these very special projects, the last year was certainly nostalgic for me. Especially since these projects will probably be the last games I’ll be directly working on for a while. As Head of Publishing I have so many other tasks, I simply do not have the time for single projects.”

You already have told us a lot about yourself, your career, and your projects. But tell us, what is the first thing you do in the morning when you come into the office?

“I guess the typical answer now would be “get a coffee” :D. But I’m not a coffee drinker, so I might instead get a bottle of water. I usually write down my to-dos for the upcoming day the evening before. Which means that, as a first step, I check whether any new items have come up. Then I start to work through as many tasks as possible. But experience has shown that in the course of the day additional things typically get added.”

Not a single cup of coffee? Not even a Latte Macchiato? ;) In addition to original games from Pegasus, you have also produced many localized versions. What are the differences between these projects?

“Well, there are very apparent differences between developing and editing of a prototype, for which we hold the worldwide rights, and the localization of the game from an outside licensor. For the publication of a prototype to a finished game, there is much more to do and to be aware of. We’re responsible for everything: the final game design, the rules (mostly in German and English), the illustrations, the materials, and the production. In case of localizations, a finished game is usually already complete. Here, the biggest challenge is creating a rulebook that perfectly suits each language and, if necessary, adapting small details for the game itself. But apparently exceptions prove the rule – see Kitchen Rush, where we did extensive rules updates for our edition of the game. And although the work on our own projects is way more intense for our graphics team, the adaptation of all language components that is essential for localizations is also a lot of work. But maybe you should ask Martin about all of this, he is mainly responsible for localizations at Pegasus Spiele.” 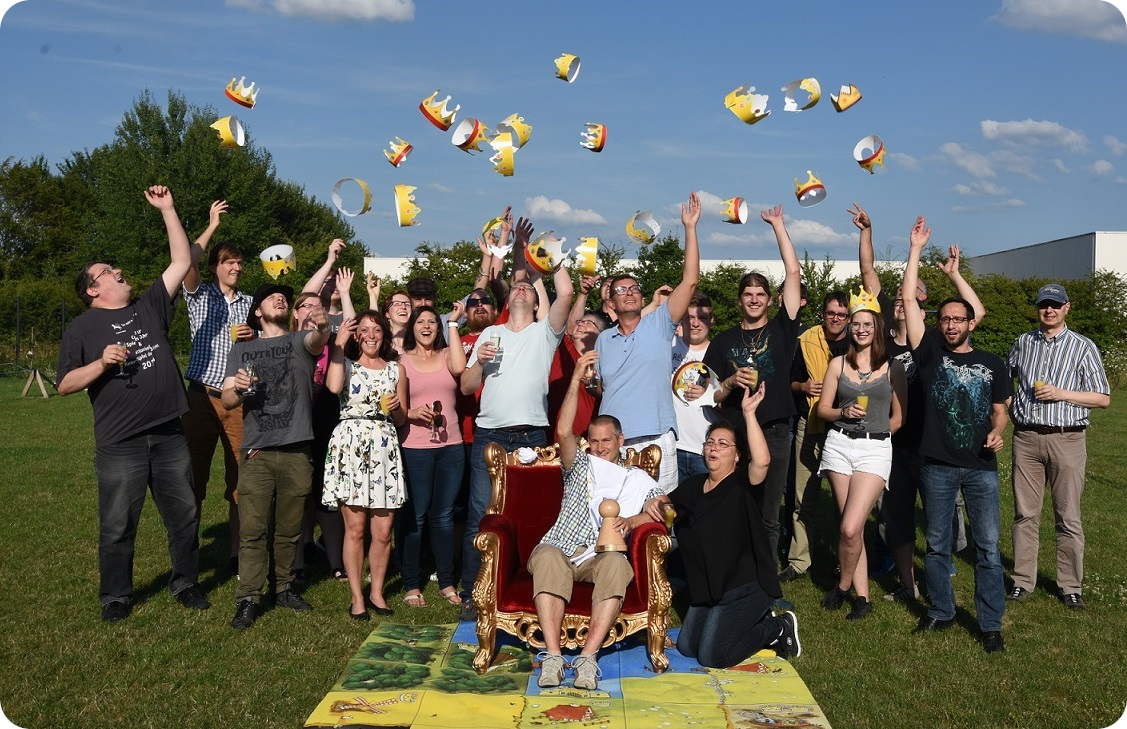 What do you think are the biggest opportunities but also biggest challenges of working at Pegasus Spiele?

“Definitely the huge number of different projects in such a variety of game types. All of the games and books from us and our partners add up to well over 100 projects last year! Therefore, there is always the challenge for us to meet release dates. We clearly want to remain flexible enough to include a very interesting game in the release planning at short notice, and ensure players do not have to wait too long for the version of an international game in their native language. This is especially challenging for games that tell big stories, because projects with 100,000 or more words are no longer a rarity. Accordingly, we need to schedule much more time for them.”

Which projects are you mostly proud of?

“Definitely Mmm! and Kingdomino. Mmm! was the very first children’s game from Pegasus Spiele, and I was responsible for its development. I was very proud as Mmm! won the Austrian Spiel der Spiele award and even received a nomination for Kinderspiel des Jahres! And then of course Kingdomino, a game from our partner Blue Orange Games, which we realized in German and received the Spiel des Jahres award in 2017. This is a game that I believed in from the beginning – and I still do! In my opinion it meets every requirement for a Spiel des Jahres award. On the other hand, I am also proud of games that did not receive any awards but instead have been in Pegasus Spiele’s catalog for many years, like Port Royal.”

What do you like the most about your job?

“This is simple: the variety. From testing to the development and design of a game, working out the production with the manufacturer, writing rules and other texts, and then of course the conventions – a game editor’s job is very versatile and diverse, which is very fulfilling for me.”

Last but not least – do you have a favorite game?

“Hmm, I don’t have a single favorite game but rather publishers whose games I prefer. But there is one game that started the resurgence of my gaming enthusiasm and laid the foundation, so to speak, for what I do today: Puerto Rico. During the summer holidays we also rediscovered another older sweetheart which we played several times: Village. It’s still great and hardly any other Euro Game succeeds so strongly with its thematic elements.”

Thank you very much for your answers, Klaus!