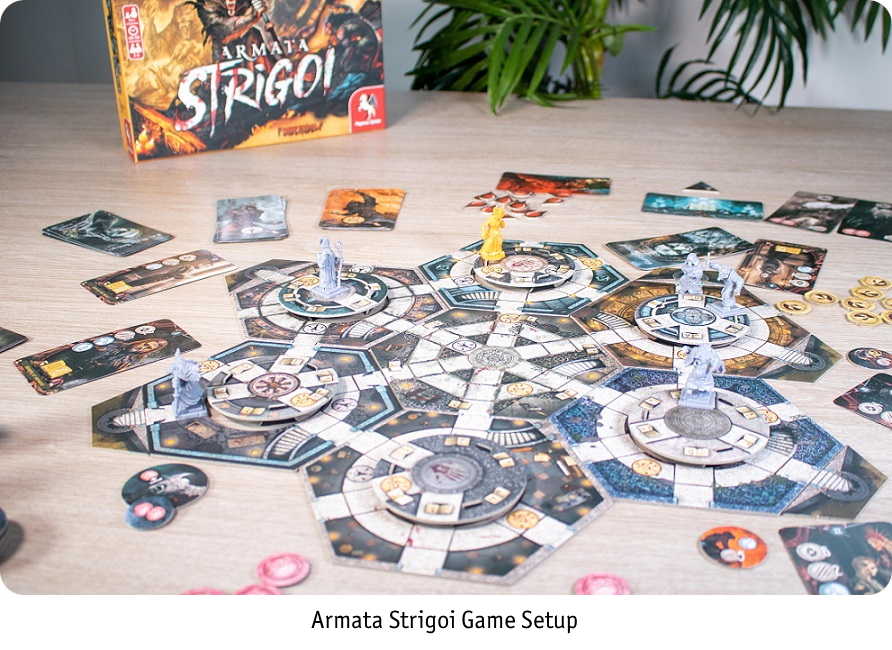 Ancient myths about supernatural creatures that dwell among us have been told for centuries. In popular culture, vampires and werewolves are often portrayed as sworn enemies locked in never-ending power struggles, for instance in films like Twilight (2008) or Underworld (2003). In Armata Strigoi you take on the role of one of the band members of Powerwolf in the final epic battle against your eternal enemies, the vampires - victory shall be yours! Unfamiliar with Powerwolf? Let’s start from the beginning…

Werewolves and vampires have long been with us. The term vampire entered wide use in western Europe in the 18th century, and was later popularized by writers such as Bram Stoker and Sheridan Le Fanu, but the folk tales that underly our modern concept of a vampire have deeper roots. The exact origin of these creatures varies depending on the source material. In some accounts, vampires are born from “any corpse that was jumped over by an animal,” while others tell the more familiar tale that one is transformed into a vampire after being bitten, or after drinking the blood of a vampire. Typically, vampires are described as immortal and nocturnal creatures who drink human blood as their diet.

Werewolves, or lycanthropes, on the other hand, are thought to be humanoid creatures with the ability to transform themselves into wolves. Such hybrid creatures are present in the legends of cultures across the globe, and have enjoyed continued popularity in the Western imagination since Lon Chaney Jr.’s The Wolf Man (1941). Since werewolves are said to age like a normal human, they are not immortal, but they often associated with rapid self-regeneration, as well as inhuman strength.

In Armata Strigoi – An Adventure with Powerwolf, the long war between the werewolves and vampires is nearing its end. But perhaps you're wondering who or what is Powerwolf? 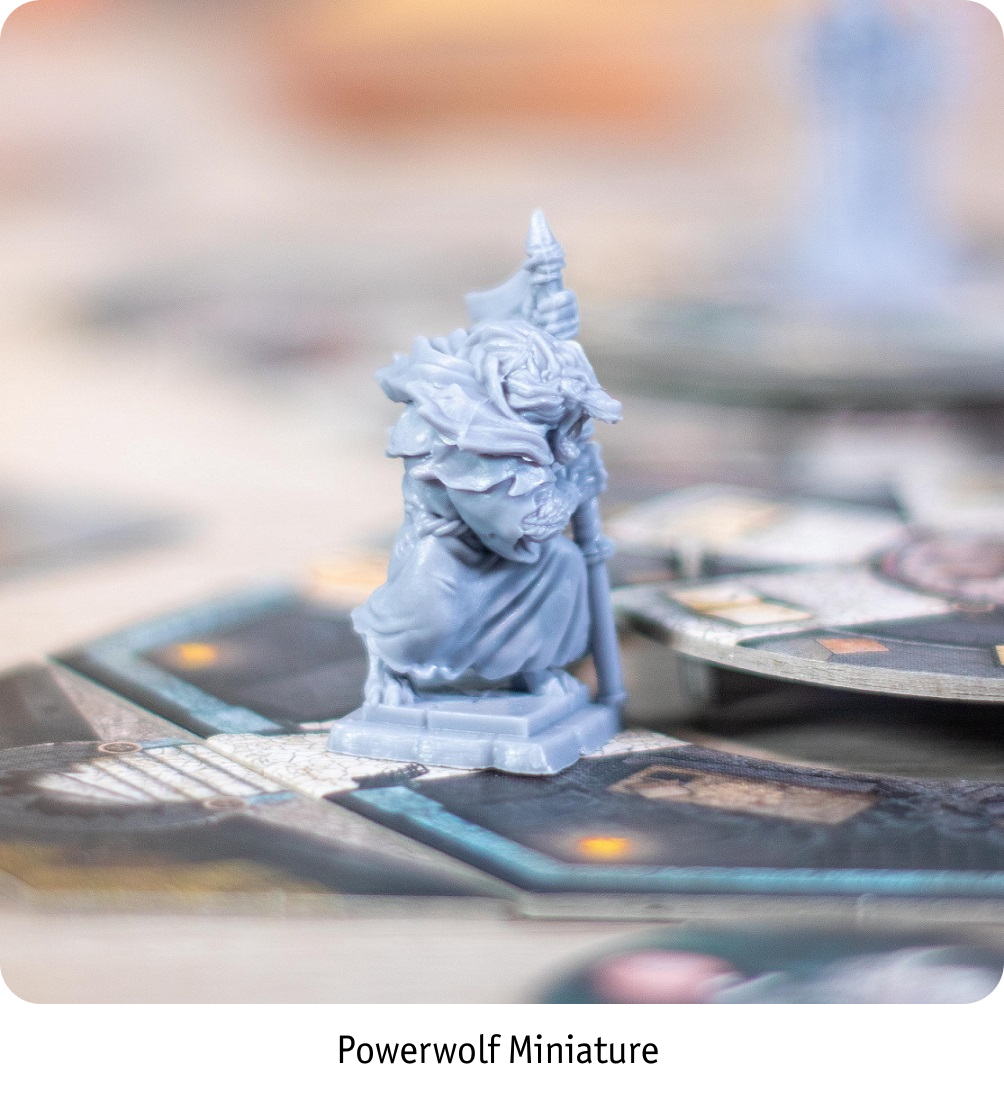 Powerwolfis a German heavy metal band founded in 2003 consisting of five members: Attila Dorn (singer), Falk Maria Schlegel (organ), the Greywolf brothers, Charles (bass) and Matthew (guitar), and Roel Van Helden (drums). Since 2005, Powerwolf have released a steady stream of successful albums while also maintaining a strong touring schedule and presence on the festival circuit. The members of their band embody their Powerwolf alter-egos on stage, extravagant costumes being a staple of the band. After signing a contract with Napalm Records in 2012, they have followed success with success. “Preachers of the Night”, the first album on Napalm Records (and their fourth overall) catapulted the band to the top of the German charts for a week. And in 2018, Powerwolf released their next album, “The Sacrament of Sin”.

Powerwolf’s lyrics are mostly sung in English, but they also frequently incorporate both Latin and German. Because of the centrality of medieval Christianity and old Romanian legends to their mythos, Powerwolf features a rather unusual instrument for a metal band: the organ! In a Mopopinterview in 2016, the organist, Falk Maria Schlegel said: “The organ sounds beautiful, but also damn aggressive. That fits perfectly into heavy metal. This combination makes our style unique, resolves the contradiction.” With the release of the album “The Sacrament of Sin,” Powerwolf cemented their place as the “true high priests of heavy metal,” the album “overwhelms both with sophisticated songwriting and sheer aggression.”

For those of you who are new to the band and want an introduction to their most popular songs, Powerwolf recently released “Best of the Blessed” on July 3. Even better, the band is already working hard on a completely new album! Alright, but what is the deal with the Powerwolf board game, you might ask. Well, in Armata Strigoi, the long battle between vampires and werewolves finally comes to an end. Together, you and your friends will fight the final battle in the crumbling old fortress of Tismana. There, you will confront the last vampire Master and his Apprentice, Strigoi from Wallachia. Your goal is deceptively simple – kill them, and escape with your hide intact. 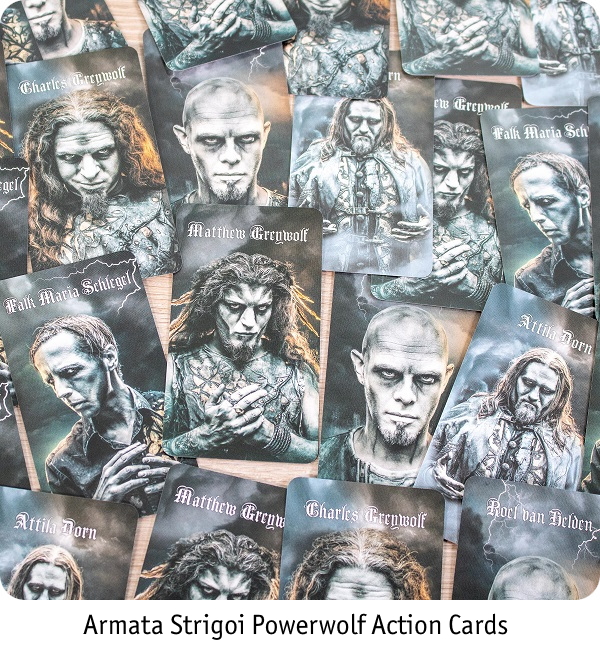 In Armata Strigoi – An Adventure with Powerwolf you set out for the final battle as one of the five Powerwolf heroes. Who will you pick? Attila, the mentor with more Pack Abilities? Falk Maria, the Preacher with more Healing Abilities? Do you want to be as fast as Matthew the hunter, or as strong as Charles, the Berserker with more Fighting Abilities? Or perhaps you strive to be like Roel, the blacksmith, with more Protection Abilities?

The action cards at the heart of Armata Strigoi feature portraits of the Powerwolf characters, and are also named after classic Powerwolf songs. With Armata Strigoi on the table, you’ll never worry about finding the right mood music again! In addition, there is a matching miniature for each character in the board game, whose base is marked with the band logo.

When play begins, your enemies, the foul Strigoi, are invulnerable. You must first defeat the Strigoi’s minions to collect blood points if you want to be able to damage the vampires. Once you’ve heaped enough undead corpses on the altar, however, you can turn your attention to your real targets – the Master and his Apprentice.

Once you’ve managed to defeat one of the Strigoi, the survivor will transform into an even deadlier Supreme Strigoi. You must work together to overcome the beast, or die trying.  Despite Armata Strigoi’s cooperative nature, you must still make the ultimate decision regarding what actions you’ll take on any given turn alone; it’s not easy to herd a pack of furious werewolves, after all! This means that you may not discuss the details of your cards with the members of your pack. Victory will be yours only when both Strigoi lay dead.

Check out the official teaser video for Armata Strigoi or the review of A&P-Reacts, and let the hunt begin! Armata Strigoi – An Adventure with Powerwolf is now available in Europe. The US release will be on September 18th.