Expected in November (already available in Europe) is Bonfire, the latest title from our partner Hall Games! This is the third game in a row to feature their great team of designer Stefan Feld, illustrator Dennis Lohausen, and editor Ralph Bruhn. After excursions into ancient Greece and the deep sea, their newest game is set in a fantasy world called Asperia. The Bonfires, which were created by the Guardians of Light to provide vital light and energy in this mystical world,   have been extinguished. The Guardians of Light cannot be found, though, having withdrawn to the sacred islands. Everyone plays as gnomes who must re-ignite the Bonfires. 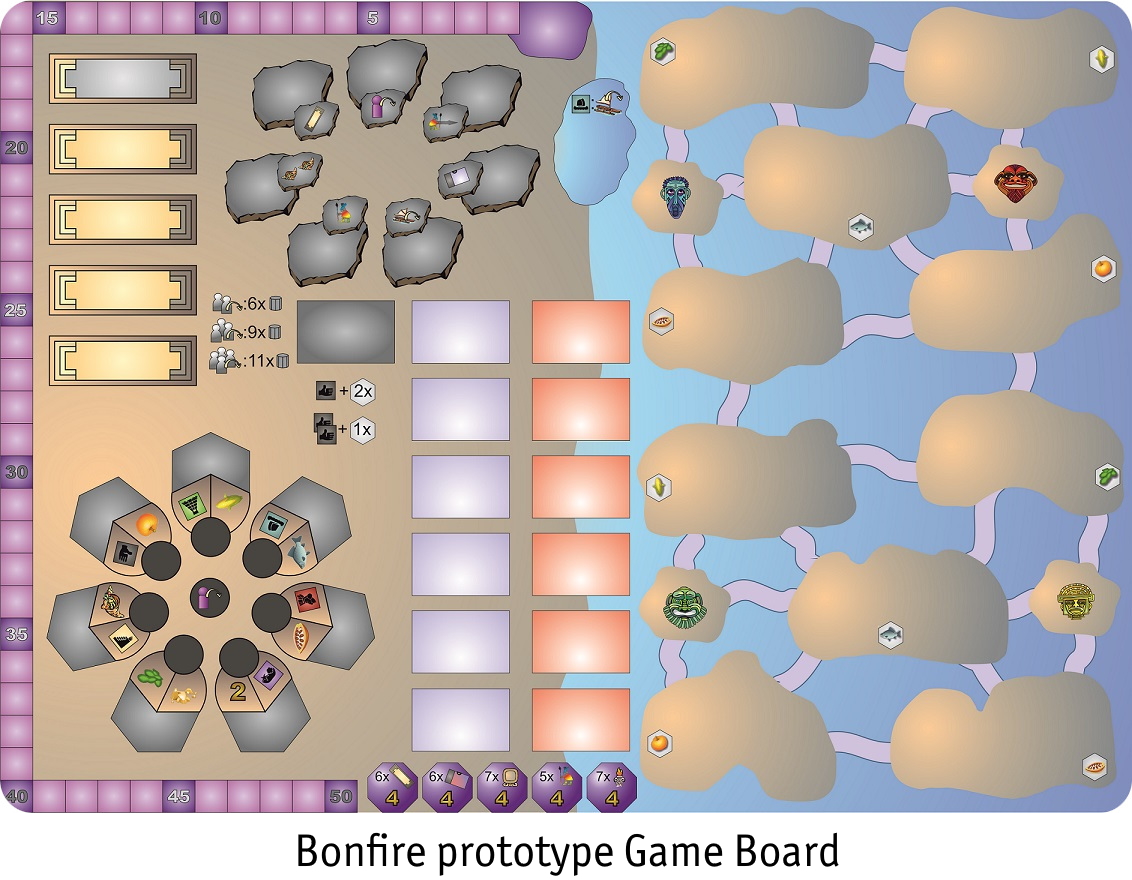 Gnomes are a very special theme that was not planned from the beginning, as Stefan Feld says: “In my very first version of the game, there were Aztecs who wanted to pay homage to their gods. Accordingly, the first graphic designs showed completely different symbols and illustrations like Aztec masks on the game board.“

Ralph Bruhn: “The move to a fantasy-inspired theme was necessary because the mechanisms used could not be combined with earthly logic. As an example: In earlier versions, you got simply points for completing tasks, but there was no thematic explanation why the tasks should be solved at all. In the final version, solving the tasks leads to a dark city being gradually illuminated. The idea that the Guardins want to walk along the path through a portal to a Bonfire also makes sense thematically. Dennis and I worked together on the elaboration of the theme. He even wrote a background story, which helped us a lot with the implementation, such as the naming and design of the game elements. Dennis also had the idea for the title  ̶  Bonfire.“

Dennis Lohausen: “The whole world of Bonfire has a backstory. Since the development of the theme was at the very beginning of this project, I also started to write down and illustrate a background story parallel to the work on the cover. And as you can see from the first cover sketches, the plot has still changed a lot.“

But not only the development of the theme and graphics were challenging. The development of the mechanics also went through a long process, "in order to get a result that everyone, not just Stefan and me but also the many test players, were satisfied with" says Ralph. “We started developing Bonfire back in 2017, when Stefan first showed me the prototype. At that time and even a long time after the game was still called stripes manager.“ Stefan explains how the name was born: "The name was based on the basic mechanism of the game, the puzzling of the stripes – what in the final version of the game became the Fate Tiles. This is a mechanism that we tested already back in 2012 when we developed AquaSphere. However, at that time it did not fit that game’s the action structure. But it still hasn't let me go and I've been developing it over the last eight years. The biggest challenge was certainly to incorporate this mechanism into an exciting and well-functioning game. In the end, there is not much left of the original prototype  ̶  we have worked on it a lot.“ 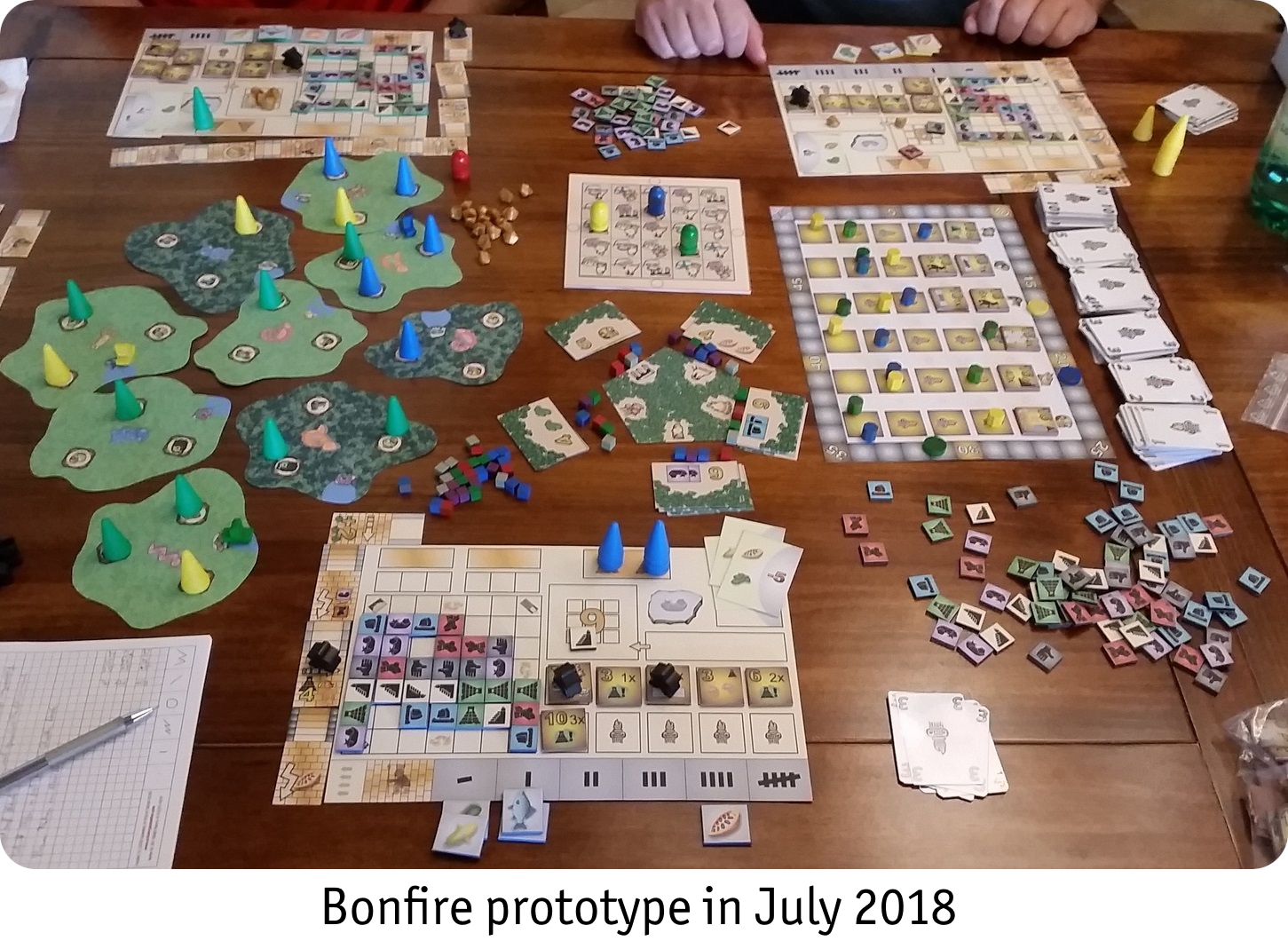 The other game elements of the game went through several stages of development, as Ralph reports: "The game has gone through several versions, some of which are very different. But from the beginning, there were always islands that the players travelled to. The Game Boards, which were initially arranged like a kind of pyramid around which steps were built, later became cities along which a path is built. And the ‘High Council‘ with the central ‘Great Bonfire‘ is probably the part of the game that has been revised most often. In December 2019 the ‘Great Bonfire‘ and the bonuses were still spatially separated  ̶  in the final game these two elements were thematically combined to form the High Council. And in March 2019, the ‘Great Bonfire‘ did not even exist yet. Here, a completely different element was tested  ̶  more figures that had to collect offerings and towers that were placed on a circle. In November 2018, we already tested predecessors of the ‘Great Bonfire.‘ Compared to the prototype from July 2018, a decisive step had already been taken at that time, because the puzzle field had a different shape and the orders were not taken on the islands but on a separate game board." (for more pictures of the prototype, take a look at the appendix!)

Besides the perfect interplay of the mechanics, the graphic design of a game also plays a major role. Dennis explains: "The more complex the mechanics, the more extensive the graphic accompaniment of a game. First of all, we roughly define the layout of the material, i.e., the size, shape, and arrangement of the components to ensure the game fits on a ‘normal‘ table with four players. Afterwards I start with the graphic designs. The illustrations, on the other hand, remained quite sketchy and generic until the final phase. Even though I had a lot of ideas for the gnomes, like why they are dressed a certain way or why this particular gnome demands this resource, the gnome cards all still looked the same until the last test. The most important and at the same time most elaborate aspect of such a complex game, though, was developing the symbolic language and placing the symbols on the material.“

Check out the second part of our post to learn how the coronavirus pandemic affected the creation of Bonfire and about how the designers fine-tuned the endgame conditions and developed of the symbolic language.