Game Development – The (Hi)Story behind the Hansa Teutonica Big Box

In November (in Europe mid-November) we are releasing the Hansa Teutonica Big Box, a new edition of the game originally published by Argentum Verlag in 2009. It includes the base game and all previously published expansions. Editor Klaus Ottmaier, who has a special relationship with the game (read on for more info), summarizes why the modern classic should be a staple of every gamer‘s collection: “Its positive player interaction due to its one-of-a-kind displacement mechanic makes the game unique. It cannot be compared to any other game and therefore cannot be replaced by any other.“

So Celtic is joined by the Hansa Teutonica Big Box, as the second historically themed game in this year‘s Pegasus portfolio. But what‘s with that strange name? And what is the games theme? Hansa Teutonica is latin for “German Hanseatic League.“ In the late medieval and early modern era the Hanseatic League was a confederation of market towns, which in its heyday encompassed more than 200 towns in Northern Europe. Many names such as “Hansastraße“ (“Hansa street“ a street name found in various German cities) and “Lufthansa“ (a German airline) still recall the renowned trading league. Even today, prominent former member cities in Germany include Hansestadt (“Hanseatic City“) in their official names, such as “Hansestadt Hamburg.“ This is the reason, by the way, why the license plate for the city of Bremen is “HB“ instead of only “B“ (in Germany, the first letters of a license plate point to the district/city in which it was issued).

Although originally a common German word, “Hanse“ has fallen out of use today. It comes from Old High German hansa whicht means “fellowship.“ During the Middle Ages small local merchants‘ leagues began fusing into larger and larger associations, which eventually grew to become the powerful Hansa Teutonica. Thus united, merchants could protect their interests and their trade routes far more effectively. Costal cities like Hamburg and Lübeck (famous for its marzipan) as well as some prominent inland cities like Cologne and Dortmund were part of the league, whose sphere of influence extended from the Baltic Sea to London in England and Nowgorod in Russia. Many cities gained fabulous wealth and influence through their membership in the Hanseatic League.

Admittedly, Hansa Teutonica the board game is not quite as well-known as its historical predecessor. Nonetheless, it charmed the gaming community when it was released in 2009 and it still has an avid following to this day. No more than two years after its release it had already won the Dutch Game of the Year and the Golden Geek Awards for “Best Strategy Board Game“ and “Board Game of the Year“. Furthermore it was on the recommendation lists for the Spiel des Jahres and the Austrian Game of the Year.

Just where exactly is the connection between this game of medieval merchants and Pegasus Spiele? Klaus Ottmaier, Head of Publishing (Game Department) is the connecting link. Hansa Teutonica was the very first game on which he worked as editor, and so it holds a special personal significance for him.

In 2009 Klaus worked temporarily for a small game store in Cologne which had taken on the role of distributor for Cologne-based publisher Argentum Verlag. When after an evening of playtesting with the publisher‘s co-funder Roman Mathar nobody seemed interested in further testing the prototypes, Klaus stepped in. His task: find a game and prepare it to be published by the time of the Essen Games‘ Convention SPIEL‘09 – which would be taking place not even ten months later. Alas, none of the prototypes felt right after a few rounds of testing and so, come March, Klaus was still empty-handed and his time until SPIEL‘09 had shrunk down to a mere seven months. Fortunately he got his hands on a list of winners of an author‘s competition at the local gaming club Hippodice Spieleclub e.V. Most titles had already been claimed by publishers, including the winner, Noblemen. (Incidentally the publisher who had snatched it up was – you‘ve guessed it: Pegasus Spiele! We finally published the game in 2012, when Klaus was already part of our editorial staff.) 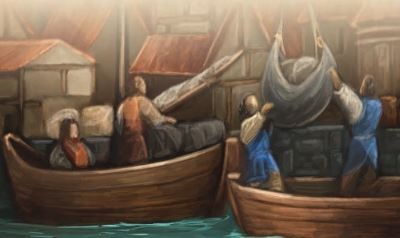 But one other game from the list took his fancy, one of the best six titles, and one that was still available. After a few test games he knew it: this was going to be Argentum‘s game for the SPIEL 2009. More than 70 playtests followed. Time and again the game was adjusted and fine tuned until – working closely with the game‘s author Andreas Steding and illustrator Dennis Lohausen – Wettstreit der Händler (“Competition of Merchants“) finally became Hansa Teutonica. And the game was an immediate hit. “This was something truly special for me. And it certainly laid the foundation for me being able to make my hobby my profession,“ says Klaus. Just like the main game, the East-Expansion and the Britannia-Expension are well-loved by fans. Given the game‘s history it is no wonder that when the rights to the game went back to the author in 2019 Pegasus Spiele aimed to publish a new edition, with Klaus again taking the role of editor.

What makes this particular gamer‘s game special? First let’s talk about the Basics: Three to five of you take on the roles of medieval merchants. Placing your wooden servant cubes and disks on the board you try to connect the northern German Hanseatic Cities with trade routes and networks. Succesfully establishing such a connection grants you one of several boons. Depending on the route in question you can establish a trade post, develop your abilities or cash in bonus points. In order to gain these benefits you try to fill lucrative trade routes with your traders as fast as possible. Hopefully without your opponents lodging themselfs in one of “your“ routes.

And that‘s where the unique displacement mechanic comes into play (which Klaus hasn‘t seen implemented this way in any game since 2009): You can kick the other players‘ wooden blocks from a space on the board at any time. But not only will you have to pay one cube more to do this, your opponent can immediately place the kicked block plus an additional one on any neighbouring route. Better think twice whether you really want to give them that advantage!

You are never railroaded into one single strategy, though. “Many different paths can lead to victory. And even after many games you will still find new ways,“ Klaus emphasizes. You‘re always faced with the next exciting decision in the game. Will you displace another player and accept giving them a boost? Will you concentrate on trade routes which net you more points or those who can improve your abilities? Or do you expand you network by establishing trade posts? 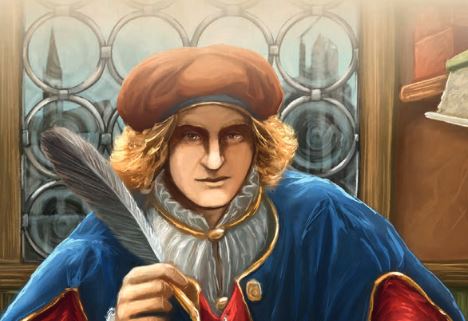 But that‘s not all. In order to up the replayability of the Hansa Teutonica Big Box even further we are including in all the expansions ever made for the game . Once you have grasped the basics you can use advancved rules to try and win the Emperor‘s Favour. By aquiring these incredibly expensive privileges from the Emperor himself you gain lasting bonuses or even additional points when the game ends. Two exansions come with their own boards as well to expand the game’s scope.. The Eastern Hanseatic-League shows a map spanning from Dresden in Germany to Danzig (Gdańsk) in modern Poland, including maritime trade routes. In order to thrive here you will have to make extensive use of your merchant disks – more powerful versions of the trader cubes. Lastly the Britannia-map introduces a permission-mechanic: Only if you control Britain‘s capitals will you be able to build your trade routes in Scotland and Wales.

Naturally we asked Klaus how he feels about revisiting the game after all these years: “Fantastic, of course! How else would I feel, knowing the first game I ever supervised editorially is still popular with players eleven years later.“ Of course, Klaus sees a few things differently than in 2009 and so the game has been given a few small updates for the Big Box. The German Hanseatic League may have declined eventually, but Hansa Teutonica is still going strong. (And by the way, the colours of the Hanseatic League – red and white – go perfectly with the Pegasus Spiele logo)