Game Development – The story behind Celtic

As a publisher that loves its home region, the Wetterau, Pegasus Spiele likes to pursue projects that allow players to explore that area at the gaming table. For this reason, a collection of games titled Mein Friedberg Spiel (My Friedberg Game) and the game Meine Goldene Wetterau (My Golden Wetterau) were developed by Pegasus Spiele for the regional event Friedberg spielt in 2016 and 2017. The Mein Friedberg Spiel collection includes two puzzles, a memory game featuring pictures from Friedberg, riddles from the city’s history, and the Love Letter variant The tsar is coming, among other games. In Meine Goldene Wetterau, players take on the role of wanderers who visit the various cities in the Wetterau region. 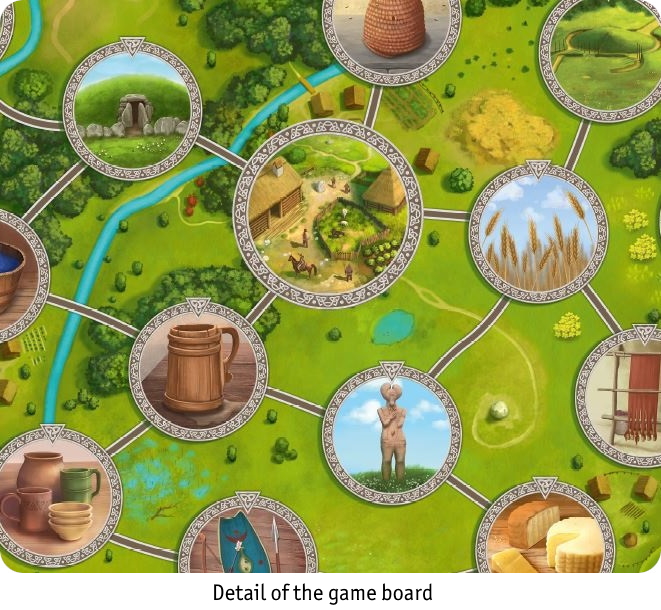 For the same reason, the new family board game Celtic by Dirk Hillebrecht was developed. Originally, it was scheduled for release at the Hessentag 2020 in Bad Vilbel, a big celebration for the whole county. However, like many events in 2020, that event was cancelled due to the COVID-19 pandemic. But that didn’t not stop us from publishing the game anyway! This game is themed around the archeological finds at Glauberg, particularly the larger than life-sized sandstone statue of a Celtic prince, which is an internationally unique discovery. The Glauberg is situated roughly 15 miles away from the Pegasus headquarters and offers spectacular proof that even millennia ago, people settled in the Wetterau, a region that was then (and still is) ideal for agricultural use thanks to its mild climate, fertile ground, and its extensive network of streams and rivers.

Celts, Romans, and the Middle Ages have all left their mark on the region, but while both the Romans and medieval society had an extensive written culture, parts of which still exist today, the Celts stuck to their oral traditions. According to the writings of Julius Caesar, it took up to 20 years for a druid to learn everything he needed to know. Unfortunately, due to this tradition, almost all of their knowledge has been lost to history. Only through the descriptions of Roman and Greek authors, as well as archeological discoveries, can we create an image of the continental Celts.

What seems to be certain is that druids played an important role as religious leaders and keepers of knowledge, who may have been in charge of meting out justice as well. In some tribes, they may have been the overall sovereign, while in others, religious and secular authority could be separated. Only men could become druids, but any other position within a tribe could be held by men or women. There were even women among the warriors, which the Romans found perplexing. That women could be very influential figures is proven for example by the “princesses” graves in Reinheim and Waldalgesheim.

The statue of the Celtic prince from the Glauberg shows a man holding a shield and wearing a curious headpiece that looks a little bit like Mickey Mouse ears. This is called the “leaf crown,” as it is thought that it comes from the shape of mistletoe leaves. Mistletoe is a plant that held special meaning to the Celts, hence why the druid Getafix from the Asterix comics is often seen in the forest, collecting mistletoe (for the Gauls were also Celts). The combination of crown and shield suggests that the man to whom this statue was given as a burial object may have been a warrior as well as a priest or druid.

This Celtic prince inspired the theme of Celtic: The game assumes that the prince used to be the leader of the Celts living near the Glauberg, and takes the players back to the moment of his death, as the clans seek a new leader to take his place. To find a suitable successor, the leading families of the clan send their candidates out into the Wetterau to collect local and exotic goods and thereby prove their competence as a leader who can provide for the people. To reach the destinations of their quests as quickly as possible, players must try to use the travel actions of their rivals to their own advantage.

The developers consulted authorities on the Celts (for example, the archeologist Dr. Lindental) to ensure that the items for these quests were historically accurate. As a result, the items depicted on the quest cards and the game board are things that the Celts were actually familiar with, or which were part of their everyday life. Items like salt, and different kinds of grain and livestock, but also rare imported goods such as gold, glass, and wine, which the Celts got by trading with the far north and the Mediterranean region. In fact, archeological findings demonstrate that the Celts’ trade network actually reached as far as Greece! The wooden starting player figure is actually a depiction of the upper portion of the sandstone prince statue from the Glauberg.

Sebastian Hein, the editor of the game, says that, “Celtic was a special project for us. Thanks to the support of the archeologists, we could put a lot of details into the game which are based on the historical background of the region. While we often navigate fictional worlds in our games, this time, we really tried stay true to the historical material. Even though we could not convert all details into it, Celtic is still a game in which fact and fiction have been combined into an amazing outcome.”

If you ever happen to visit the Wetterau, we highly recommend paying a visit to the World of Celts at the Glauberg (www.keltenwelt-glauberg.de/en/) to see the statue of the Celtic prince as well as all the other amazing archaeological finds for yourself!

Celtic is now available in Europe, and will release in the US on September 18th.