Meet our latest hit family game: Kitchen Rush, the cooperative real-time game where you face the world of gastronomy. Together you must successfully steer the destiny of your newly acquired restaurant, which means seating patrons, taking their orders, and cooking their meals – all of which you have to coordinate in real time!

Greek publisher Artipia Games originally published Kitchen Rush back in 2017, and Pegasus Spiele now has its version, newly illustrated with updated rules. Sebastian, you are the editor for Kitchen Rush. Is it common for localizations to be completely revised before being released?

“It depends on the game. Usually, we translate the game and put our focus on the text. Sometimes, though, we have to add additional text or graphics, adjust the page layout, or even rewrite the rules. This doesn’t necessarily mean that the original rules are incomplete, but just that they simply don’t fit the European or the US market. So we very rarely make editorial changes to a game. It was different with Kitchen Rush, though. We saw a possibly large target audience, which we would otherwise never have reached with the original game due to its complexity.”

What is the most desirable thing about Kitchen Rush? Was it love at first sight?

“Kitchen Rush has perfectly depicted our idea of a real-life restaurant kitchen: it’s hectic, everything be coordinated while under time pressure, and there are hungry guests who want to be served as quickly as possible. Plus you have to make sure that you meet the patrons’ expectations! Fresh ingredients need to be bought and prepared, cooking times have to be exact, and the right spices must be added. The plates also get dirty and so someone has to do the dishes! I don’t know if it was love at first sight. We surely messed up our first games, but nevertheless the gameplay has captured us immediately! J”

In Kitchen Rush, everyone is acting separately to accomplish their own goals, but it's pitched as a cooperative game. How does that fit together?

“Although everyone is doing different tasks at the same time, you can only complete all the goals for a scenario if all tasks interlock with each other. Therefore, good teamwork is essential. This means that everyone has to clearly communicate if they need help with something, like readying fresh plates or seating more guests. This sounds stressful, but don’t worry, each “shift” for your restaurant is only 4 minutes and the longest scenario is 4 shifts!” 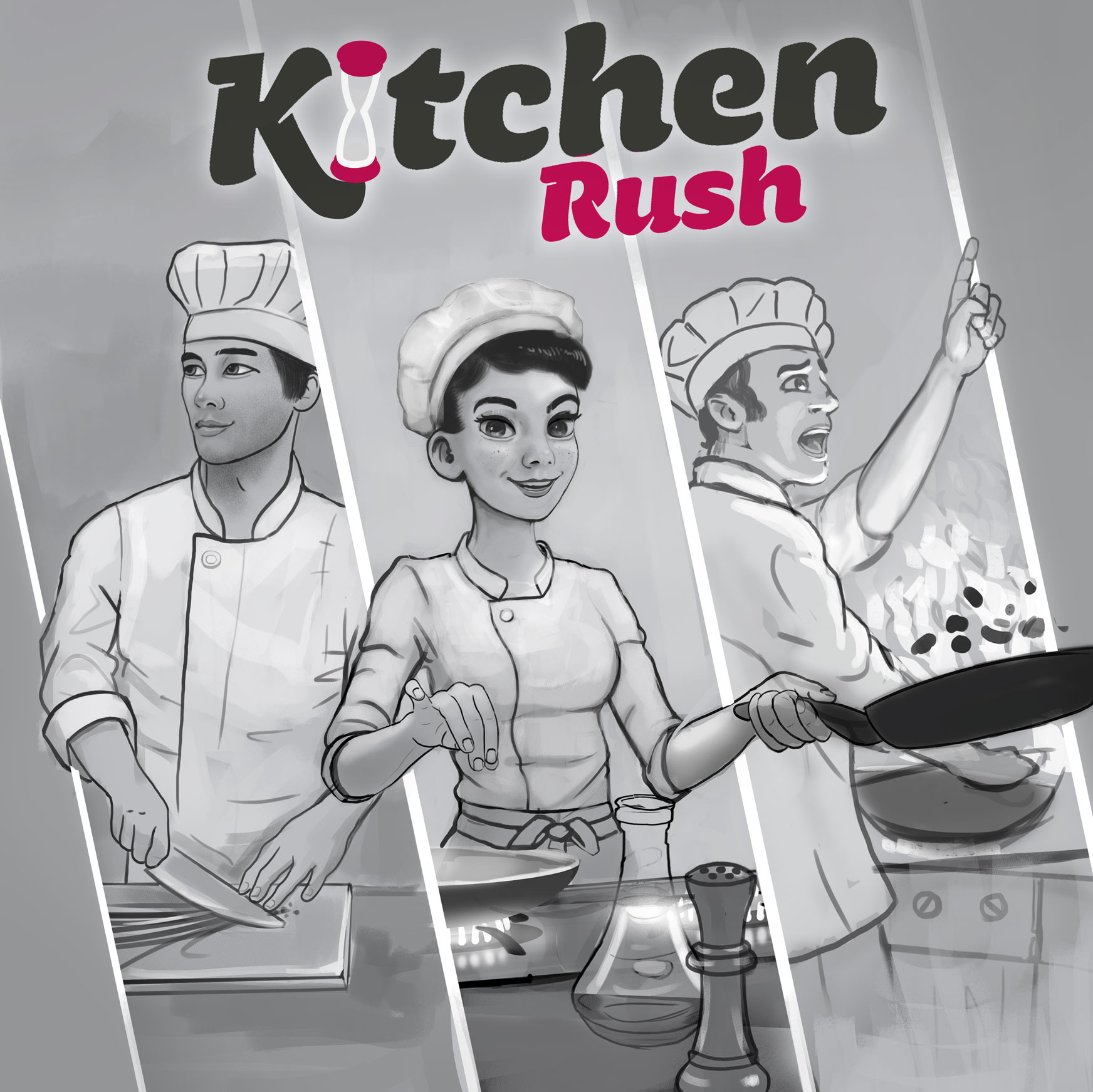 Why did you decide to release a fully revised game version of Kitchen Rush?

“Well, there were a lot of rules in the original version – 16 pages worth. Even at the lowest level of complexity, we only managed to win the game after a third trial round. But we already had the idea of a family game in our minds, since the setting fitted perfectly into that style of play. So we wanted to try to introduce the rules gradually rather than all at once. At the same time, we wanted to put a graphical rework to the game.”

And you’ve succeeded – the rules for Kitchen Rush now have eight scenarios that teach the rules step by step so that as your restaurant grows, you must learn new responsibilities, be able to cook more complex dishes, and even deal with food critics! What was your approach for this task and what changed from the original version?

“Our first step was to divide the rules in a useful way. And quite frankly, the divisions frequently changed during development. Some elements moved forward, others to the end, only to be moved back to the front. And we also added a completely new element, namely the separation of ingredients like bread and pasta from the others from scenario five onwards.”

So, what made you decide to put a drastic change to the game by introducing a completely new element?

“The original game didn’t have a separation and instead included a third storage room for all goods. In various tests the players started with two pantries and in scenario five the third pantry was added. During the very first test run I was quite surprised when four young playtesters looked at me angrily and refused to spend their restaurant’s hard-earned money on a useless third pantry. The following tests showed the same several times – until we finally separated the goods, which was fully accepted and approved by the next test groups.”

In addition to restructuring the rules and introducing a new game element, the graphics of Kitchen Rush have also been completely revised. Can you tell us a little bit more about that?

“Sure! The development for a new game plan was definitely the most complex part and cost me some nerves. We wanted to create a style more suiting the development of the restaurant. While the idea itself was easy, the technical implementation was much more difficult with many challenges to overcome. Let me go back a little, actually. The game board is made of multiple tiles that assemble together like a jigsaw puzzle, with each tile showing part of the restaurant like stoves, seating area, or storage room. Each tile has two sides, one for the basic version for your initial restaurant and the other for the improved version as your restaurant gets better. New elements for different scenarios, like a better office or a bar in the dining area, should only appear during the introduction part in the scenario. This means that they have to be introduced on a single board tile, so just that one tile would be turned over to show the upgrade. This wasn't easy because of the many elements and the few tiles we had. The four corners on each tile must be square, otherwise you cannot flip them over and still have them assemble properly. In general, the projecting “noses” on each tile were a challenge, since they protrude into the adjacent tiles. But if the adjacent tile is rotated, the puzzle nose must still fit into the new graphics. So all puzzle noses had to either run into walls or the graphics had to be identical on each side.”

Have you made any other adjustments?

“Many! For the implementation of the scenarios, we had to create a couple of new guest cards, add a “dirty” side to the plates, and also create table reservations for two or three player games where no guests can be seated. The original game does not have free drinks for waiting guests – a change in the Pegasus version that we introduced as part of the campaign structure. From the first ideas to the data submission, almost eight months have passed. For an already released game this is a lot of time! :)"

Wow, this sounds like a lot of hard work and many test runs! You certainly have some memorable moments during the long and intensive work on the project, right?

“Last year in April during a week game, I tested Kitchen Rush with eight children who took turns playing through each scenario. A more complex “adult” game was being tested at the table next door, but those testers probably had a hard time of it as the kids were incredibly noisy. J After five scenarios the children were exhausted and needed a break before bravely completing the remaining three scenarios.”

Thank you for this interview, Sebastian!