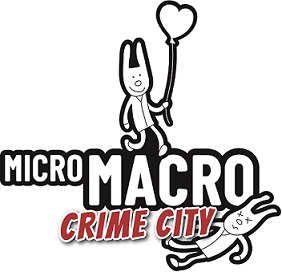 Welcome to Crime City, where your team of sleuths will need sharp eyes and outstanding powers of deduction to solve numerous wrongdoings. It’s all part of MicroMacro: Crime City, the newest game from our partner Edition Spielwiese!

MicroMacro: Crime City (You are from Europe? Find your copy of MicroMacro in our European webshop) comes with 16 cases of various difficulty levels, and the huge map of the city where they all take place. Working together as a team, players must investigate the crime on the case cards, find motives and evidence, and catch the culprit as they trace the path of each foul act from inception to completion. Sounds easy? Think again! Amidst all the hustle and bustle of Crime City it can be surprisingly difficult to find what you’re looking for. Creativity and a keen eye are essential to answering the question on each case card correctly. A magnifying glass is even helpfully included to make spotting important clues a bit easier! Everything you see in MicroMacro could potentially be part of a criminal act, or it may just be everyday life in the city of crime. Will you find the clues that will ultimately lead you to the culprit?

The creative minds behind MicroMacro are the author/illustrator trio Johannes Sich, Daniel Goll, and Tobias Jochinke from Hard Boiled Games. They had the idea for the game back in 2016, but such a detailed project needed a lot of time for development. Even the very first prototype test required a huge amount of preliminary work, as Johannes reports.

"Normally you use very rudimentary prototypes at first,“ he related. "But in this case, that contradicted the basics of the game, as the extensively detailed illustrations are essential. So, the very first test required elaborate graphic preparations. Even then, our first city drawing was still extremely rudimentary compared to the final map. It was a random assortment of uniform houses, cars, and people. In between, there were a few shops and – more poorly hidden than not – the scenes of our first case: 'Dead Cat.‘

But the work has been worth it, because the playtesters were enthusiastic! And so, the trio continued development and more and more stories emerged in Crime City. Michael Schmitt, publisher of Edition Spielwiese, then joined the project in early 2019 after hearing about the game later the previous year. It only took one playthrough to make it immediately clear to him that he had to publish it. More rounds of testing proved him right: "From family to friends, so far there hasn't been a group that hasn't loved the game. Most of them didn't want to stop playing after the second case, or even after the fifth."

As you've probably guessed, working on MicroMacro wasn't comparable to developing other board games. Daniel gives an insight: "We tried out a lot of mechanics and even developed a test app in parallel, which allowed us to gain a lot of experience on the game mechanics ... and the realization that some things can't be implemented digitally. The experience of standing together at a large map allows very different player interaction possibilities than playing on a screen. The very fact that several people can point to different locations is a great strength of the printed city map."

Tobias still remembers a test round that clearly showed the strengths of the analog implementation for him: "In a test game with a mixed group of 20-, 48-, and 63-year-olds, the 63-year-old person had problems with his eyes and thus also had difficulties recognizing the details. In the end, however, it was she who contributed the most clues – just by thinking, combining, and, above all, coordinating with her fellow players. That was an important moment for me, because it became clear once again how important talking, thinking, and puzzling are in MicroMacro."

While the initial tests were run largely in the "normal way," the Covid-19 pandemic changed the conditions drastically, as Johannes reports. "In the middle of the final test phase, suddenly it was no longer possible to meet people or visit other people. We were already pressed for time and needed a quick solution, so we developed a handful of prototypes that we sent by mail to couples and shared flats so they could playtest at home. We then watched via video conference, as silent observers, or simply listened to the players' conversations without video transmission.

“As it turned out, this test setting wasn't all that bad as the players were even more relaxed without a direct observer. We were still able to be there and view any problems in the stories as well as dramaturgy and game fun, and thus gain valuable insights for optimization. Overall, we really had a lot of test groups, from die-hard board gamers to groups that normally play little to no board games at all – at least until MicroMacro.“

Although Johannes, Daniel, and Tobias have been working on their game for several years, the fascination remains. "[MicroMacro] is an easily accessible game that is fast to learn and doesn’t demand that you invest long hours to play,“ Tobias says. “Due to the fine details, there’s always the impression that something is still hiding. The detection and combining of clues, the puzzling and discussing with the other players, all promotes a completely new form of game dynamics."

Finally, Michael and Johannes revealed a little secret: "Even some of Crime City's inhabitants and animals, who are not directly connected to the cases, have a daily routine. There are numerous small scenes and hidden side stories that players can discover. And at one point in the game, there's even a gaming group that plays MicroMacro." And with expansions revealing more of Crime City coming soon, there’s even more to discover in the future!

Want to solve all the crimes? Sharpen your eyes (or use the magnifying glass included in the game) and start your adventure!