UNDO – Tales from the Workshop 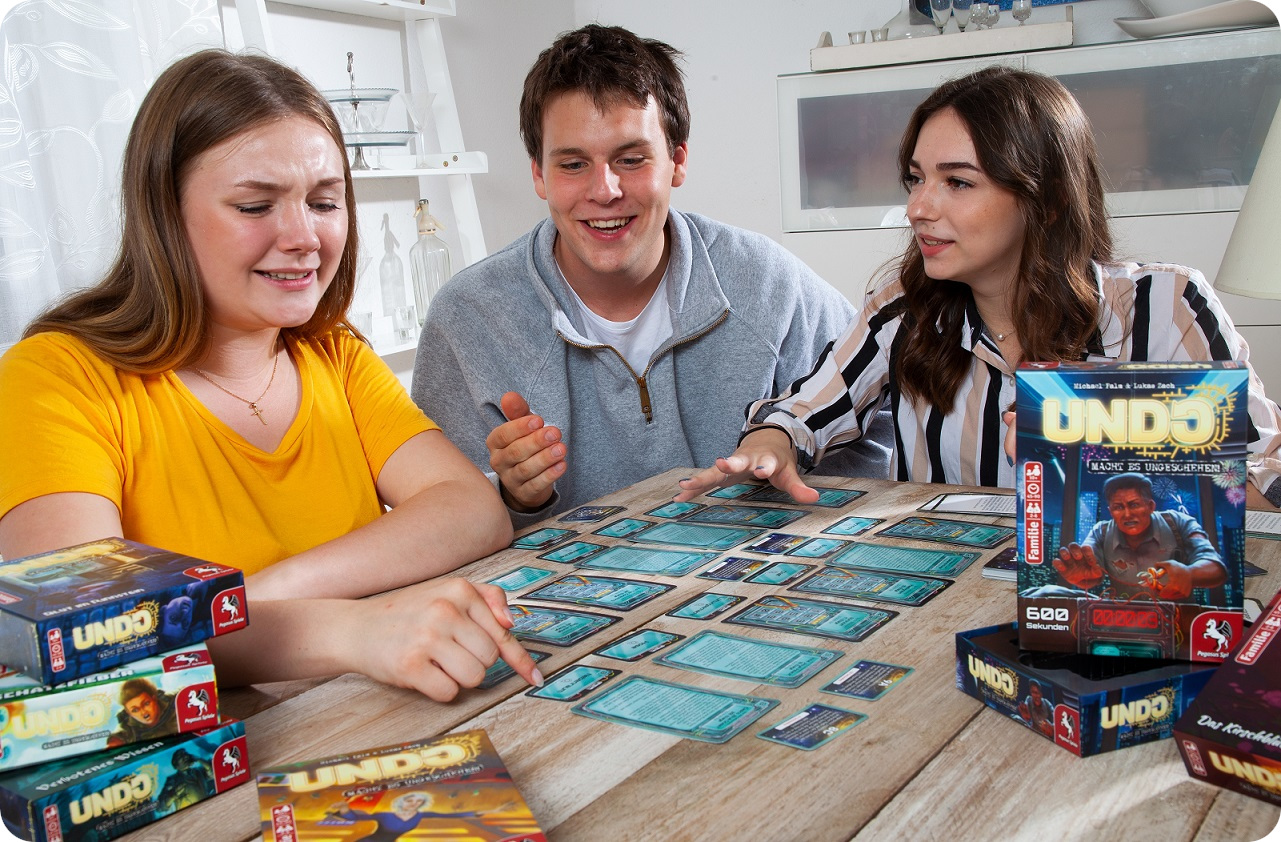 To turn back time, defeat fate, change the past, and undo former deeds – this unfulfilled dream of humanity becomes reality in UNDO. For a few months now, the sixth case, UNDO – 600 Seconds, has been available and soon the seventh case, UNDO – Peak of no return will be released. So it’s time to take a look behind the scenes at the making of this innovative storytelling game series.

At the start of each UNDO case, two to six players take on the role of incorporeal fate weavers in an exciting story surrounding a tragic death. They seek to avoid the calamity by travelling through time, represented in the game by story cards, laid out face-down in front of the players, each describing an important event in the life of the deceased. Upon travelling to these specific moments, players are given the opportunity to alter events as they see fit.

In 2018, on a late October evening in Essen, the games editor-in-chief of Pegasus Spiele, Klaus Ottmaier, and his colleague, Sebastian Hein, are leaving the trade-fair area of the SPIEL after a long day’s work when Michael Palm and Lukas Zach approach them. Both Michael and Lukas are game designers and have worked with Pegasus Spiele for years. In an inconspicuous box, they carry the prototype for an innovative storytelling game. After some persuasion, Ottmaier and Hein agree to test the game then and there. An hour and a half later, they are grinning ear to ear, the stress of the day long behind them.

That is how a case telling the origin of UNDO might start. But that would ignore the history of the game’s development. Two years before the encounter at SPIEL, during a visit to the Pegasus Spiele headquarters in Friedberg, Lukas Zach showed Michael Palm a prototype – the first rough draft of what should later become UNDO – Cherry Blossom Festival. Michael Palm found the story and the game mechanics immediately intriguing when he tested it. Lukas, as an experienced role-player, had simulated the experience of having extra players present effectively. Together they would work on the original version of UNDO in the months to come, keeping the project under the radar. But Ottmaier and Hein were so impressed following the demonstration of UNDO at SPIEL that they ordered not one, but three titles immediately.

In May 2019, Cherry Blossom Festival, Blood in the Gutter and Curse from the Past were released in Germany. However, the designers were not content to rest on their laurels. Keeping the core concept intact, they sought to tweak the mechanics to give each theme its own flavor. As a result, in UNDO – Forbidden Knowledge players not only discuss and decide which events they journey to and how they will alter the fate of the deceased, they also have to take care not to lose their minds along the way. 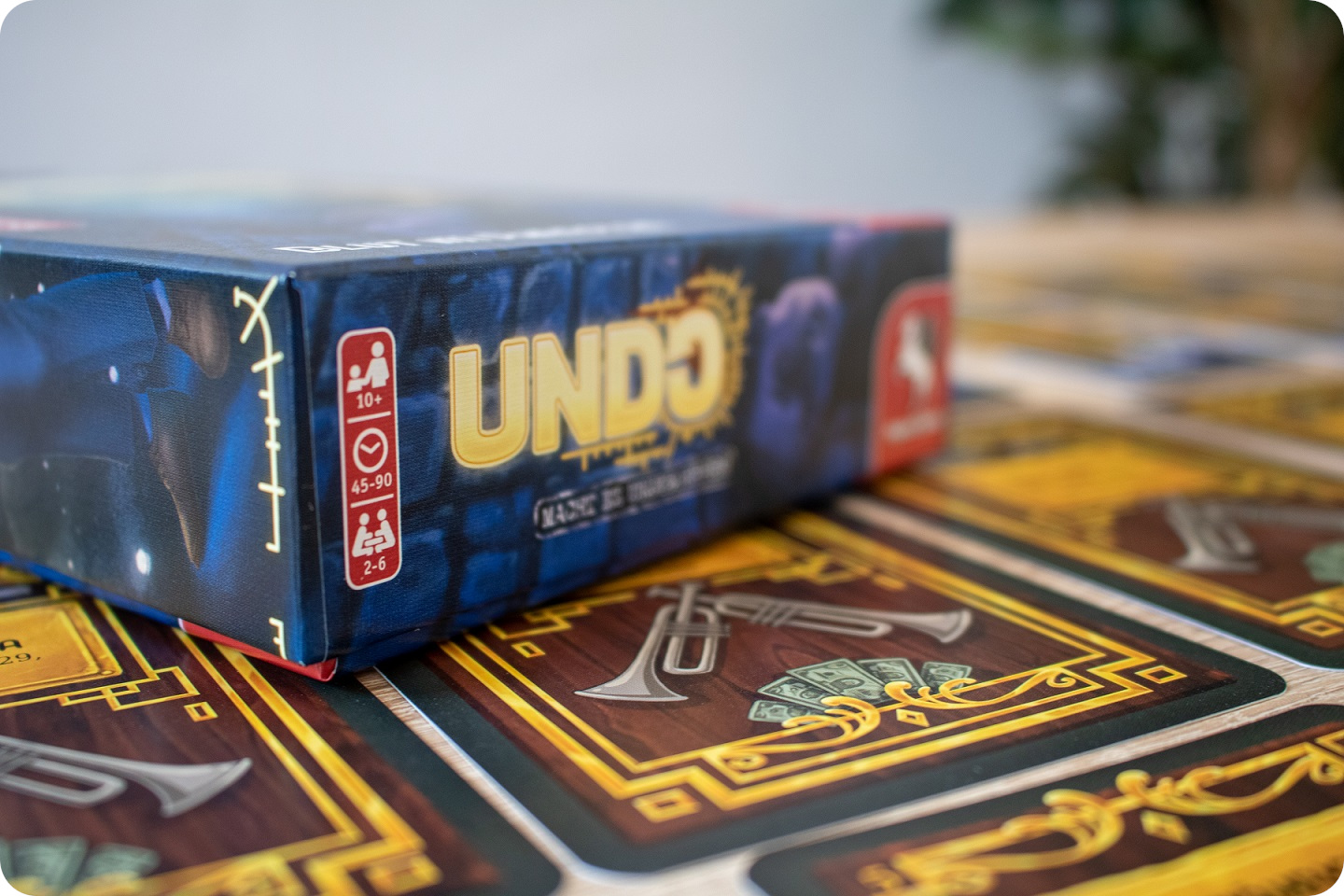 Developing a new case takes Lukas Zach and Michael Palm approximately two months. During that time, they test the case extensively, supported by their board-game rounds, working toward a fine balance between the comprehensible and the cryptic and the ideal amount of hints for each event card. Next, they craft a prototype for the Pegasus Spiele editorial team, who put it to an acid test. The authors then incorporate feedback into the case and the process starts anew – until a case is finalized and gets printed. According to Klaus Ottmaier, the work on UNDO cases, despite being heavily based on an unfolding narrative, does not differ much from the development process of other projects. Improving language and ensuring that everything is logical and correct remain the core criteria for the editorial team, be it with UNDO or any other game.

While the Pegasus Spiele editorial team continues to polish a case, the designers are already starting on their next one, drawing inspiration from literature, comics, TV, and film just as much as from historical events. The starting points for each case are a rough setting, a protagonist, and a period in time during which the story unfolds. Michael Palm and Lukas Zach then weave a coherent story around these basic parameters. It is of the utmost importance to both that each scenario presents a completely new experience, instead of being a mere sequel, as each episode of UNDO is intended to be fully independent from the others.

Over two years have passed since that day in October 2018 and about 200,000 UNDO games have been sold worldwide. Yet new themes, stories, characters and mechanics are still percolating in the minds of the designers. After the fifth and sixth case, UNDO – Treasure Fever and UNDO – 600 secons, in the seventh case, unlike in previous episodes, players will have to do more than just prevent a single death. Now, the lives of several people hang in the balance. High up in the icy caves of the Himalayas, a touching, tragic, and thrilling story awaits. The seventh UNDO – Peak of no return case is planned to be released in a few weeks and we promise there will be more to come. After all, it has never been as easy to change fate as in UNDO!